S.E. Hinton is quoted as saying “If you have two friends in your lifetime, you’re lucky. If you have one good friend, you’re more than lucky.” And he’s exactly right. It is way more than luck. It is the good grace of a sovereign Father. I really get what he was saying and I realize that good friends can be hard to find. But in reviewing my days of life, I am “pierced to the soul” (although that is not how I would usually speak, it’s the only way to describe it) to think about my friends. My good friends. I have been blessed for a lifetime and an eternity with friends. The genuine good kind. In college, I was blessed to have two wonderful friends (truly even more than that) who served me and loved me well.

Miranda became my friend the first day I arrived on the campus of SU. She was my hall neighbor, and she and her roommate took me under their wing and helped me to get acclimated. Our friendship grew through the years, and my Junior year we became roommates. Our room became a haven of rest, joy and comfort for me. Most days she left an encouraging note with verses for me. Our walls were covered with creative signs to encourage each other. As an Elementary Ed student, she had the gift of “bulletin boards”. 🙂 One day I came in the room, and she had taped all across the top of the wall on my side of the room: “YOU are … SUPERCALIFRAGILISTICEXPIALIDOCIOUS”.
She had cut out every letter! And she has taken that kind of care to show me friendship ever since. We married similar men and we all moved to Memphis together for the guys to begin seminary. We feared for our lives together in our very scary apartments. We served at “churches” near each other in Mississippi, diligently praying for the day our sentence was over. She would agree (although even there, God faithfully provided my family with some people in that church who sustained us and kept us from quitting early on.) Our children played together and celebrated birthdays together when we moved back to Alabama where our husbands served churches within a few miles of each other again.
I was able to spend some time with her just a few months ago, after not seeing her for nearly 20 years and it was as if those years never existed in between.

I met Amy at our Fall Retreat my Sophomore year when I became her “mom”. Amy has been a source of laughter, refreshment, and joy ever since that week. She actually turns 50 three days before me this year. 🙂 Again, it’s hard to put into just a brief post the memories those days bring up. Getting to know her real precious family (they lived in B’ham), seeing her mercy heart, enjoying her contagious laughter, depending on her loyalty, being strengthened by her faith …  what a gift she was! She was there (not actually, but nearby) when I was engaged, she was there when I got married, she was there when I had babies, she was there when we moved … Always there. And still is. Across the miles and years, she prays for me. She lets me know she is and she does. She calls me or texts me and lets me know she is thinking of me or was reminded of something. She is loving me well all these years later. 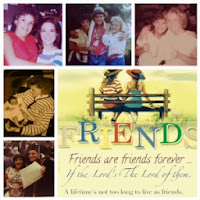 Yes, even good friends fail us sometimes. They misunderstand us and we misunderstand them. We hurt each other without realizing it. But I have been blessed to have friends along the way who chose to love me, forgive me and stick with me through the years. When my sister was born, I got a best friend for life. When I got married I received another one. Into adulthood, my mom became one. Into their adulthood, my three daughters became my best friends. And in between, I have developed some amazing friendships that have sustained me through days, months, and years …

Michael W Smith sang: Friends are friends forever if the Lord’s the Lord of them. And a friend will not say never ’cause the welcome will not end… No, a lifetime’s not too long to live as friends. And I wholeheartedly agree. I have several good friends for life. The difference in what Smith has sung and what Hinton concluded is just one thing: The LORD.  And I’m not even through … the list has expanded … more good lifetime friends to come!

Thank You LORD for an eternity of friends. I am blessed beyond measure.

Here’s a word you can take to heart and depend on: Jesus Christ came into the world to save sinners. I’m proof -Public Sinner Number One! of someone who could never have made it apart from sheer mercy!!