Brent and I enjoyed spending time together my Junior year at Samford University. We went to the SU basketball games, watched Auburn football together, took a road trip to meet the families, played a little racquetball, walked around campus chatting and talking doctrine, and I spent hours upon hours watching him play intramural sports. 🙂 He lived in an apartment off campus, but we spent most of our time on campus. After graduation, he headed home to Georgia and I headed off for a week to Panama City Beach, FL with a singing group (of SU students) because we had some concerts scheduled there.
After the week, I dropped some friends off at SU early in the morning after driving all night. On my way home, I fell asleep at the wheel and ran of I-65 from Birmingham to Decatur, AL.  The little car I had come to love, my Datsun Honey Bee, was totaled after flipping over and landing in a ditch. Jesus Never Fails rang out loudly in my cassette player that early morning as I crawled up that embankment with only a scratch on my toe. My parents came to get me, and after seeing the skid marks of my car’s tires in the median then back over and off the road, we praised God for His protection of an unwise college girl driving when she was too sleepy. Because it was so early, very few cars were on the road…
About a week later, my friend Amy and I met Brent and the rest of the summer crew back in PCB for a summer-long student Beach Project with the Campus Outreach organization. 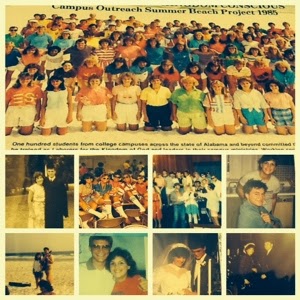 We spent the summer in focused discipleship and evangelism. It was such a great group of students. Brent and I reminisce often about those days and the people there. We prayed in in those days that the local church would recognize the need to have that kind of emphasis on both discipleship and outreach. There were several times during the summer that we met collectively for extended prayer and confession. Other times were just for fun and games. We all had jobs in the area with the sole purpose of building relationships with lost people there in PCB and sharing Jesus with them … witnessing through our lives, our work ethic, and our words. It was an amazing summer. God was shaping us personally and as a team.

We were engaged one night that summer. It was supposed to be a beautiful night, like the others, where we would stroll down the beach, sit in a swing and watch the sunset. This night, though, there was a cold front. It was raining and chilly. But, with a diamond ring burning a hole in his pocket, and having worked up the nerve for days, nothing was stopping my Prince Charming from proposing that night. We ended up running under a gazebo where my teeth were chattering, and he knelt down on one knee and ask me to marry him. He jokes that it was all part of the plan. To freeze me to death so I would quickly say yes and we could run back to the warm car! 🙂 It wasn’t the romantic scene he had planned, but it certainly was memorable!!
We spent the next few months planning, talking and praying about the future. On February 1, 1986 at Central Baptist Church in Decatur, AL my brother walked me down the aisle to my future hubby, and my Daddy married us.

Thank You LORD for orchestrating every day of my life in such a way that I would meet and team up with Brent to serve You with our lives forever. Thank You for protecting me, although I made a foolish decision to drive after no sleep, and for keeping me and leading me to Brent to become his life’s partner in the gospel.
Thank You that You have never failed me … Never. Ever.
Here’s a word you can take to heart and depend on: Jesus Christ came into the world to save sinners. I’m proof -Public Sinner Number One! of someone who could never have made it apart from sheer mercy!!