TThe weather almanac for Nashville reads:  The coldest day of 1978 was January 9, with a low temperature of 7°F. For reference, on that day the average low temperature is 30°F.

The longest freezing spell was from January 9 to January 16, constituting 8 consecutive days with temperatures strictly below freezing. January 15, 1978 was the 7th consecutive day in which temperatures remained below freezing, tying a record. During this stretch, the temperature never rose above 31 degrees, nor fell below 7 degrees.
Our last year in Nashville (1978), brought the snowiest and chilliest consecutive days that I remember in my lifetime – even since moving to Rapid City, South Dakota. We missed something like 16 days of school during January and February due to icy road conditions that hindered school buses from getting to school, and also pipes that were frozen for days. But in the midst of that cold winter, we had some of the most fun snow days I remember as well!
My parents passed on to their kids a love for snow and snow play. I am thankful that they didn’t try to protect us from “having too much fun.” Really. Some parents do. We didn’t have Facebook and YouTube, so people from everywhere weren’t able to express their every opinion about it being too dangerous. No one one grilled us on our safety procedures. Sure, there were some spills and bumps and bruises. My mom had had an accident during snow play when she was younger that hurt her back, but she didn’t let that dictate a forever fear that prevented snow fun for us.
“Use your common sense” has always been her motto. She now adds “if you have any.”  🙂 … 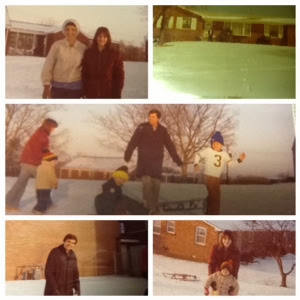 Our backyard had a hill that led to our driveway beside our house, which was also a long steep hill. On a good icy/snow day, we could start at the top of that hill in our backyard on our sleds and we could go – without stopping – all the way down that hill, landing on our driveway (you had to be good at steering or you would plow into the church bus parked in our driveway), then still continue down our driveway and across the street. Now the street in front of our house was busy during the day. But during a snow storm, it was treacherous and people didn’t travel it as much. We posted someone at the bottom of our driveway to watch for cars, and if they yelled for us to keep going … We did! We didn’t have lots of winter/snow accessories, so we used all the warm items we could find and then dried them by the fire until it was time to head back out again.

Friends came over to join in the fun, and we stayed out there for a hours enjoying the ride.
Grace. Every. Day.
“For to the snow He says, ‘Fall to earth.’ …
Though your sins have stained you like the color red, you can become white like snow;
though they are as easy to see as the color scarlet, you can become white like wool.”
Here’s a word you can take to heart and depend on: Jesus Christ came into the world to save sinners. I’m proof -Public Sinner Number One! of someone who could never have made it apart from sheer mercy!!